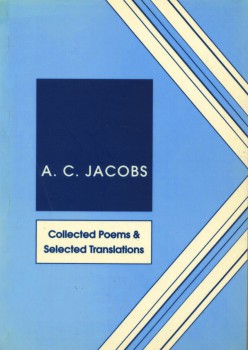 "An astonishing book edited with devotion and discernment." Dannie Abse

"It is hard to believe that his translations are translations... He has made Vogel's tone, the delicate nuances, his own." Robert Friend

Ted Hughes wrote: "Tony Rudolf sent me the volume two days ago and I've been reading this. Amazing that we can be wholly unaware of, in the writing of one's contemporaries. We cover our ears from the din, perhaps, and miss crucial signals. Certainly I'd missed Jacobs whom now I'm getting to know with great pleasure."

In a letter to Jacobs, the novelist Dan Jacobson refers to "your northern Anglo-Scottish pragmatical self coming down hard on your more emotional Jewish self". Emanating from the poet's explicit Judeo-Scottish matrix are many fine English lyrics, poised and vulnerable, deeply felt and highly intelligent, locally grounded - Glasgow, London, Jerusalem, Madrid - and universally accessible.

This volume reprints his previous books and includes many unpublished poems - the fruits of two years' research among the poets' papers. The full notes prepared by the editors contain variants and other material of interest.

Jacobs was a distinguished translator of Hebrew poetry. The translation section reprints his books of translations of poems of David Vogel and Avraham Ben-Yitzhak as well as a selection of his versions of Bialik and poets of a later generation, including Amichai, Carmi, Zach and Rabikovitch.

The book contains essays by the editors, John Rety and Anthony Rudolf, and by Philip Hobsbaum and Frederick Grubb. It begins with a foreword by Jon Silkin, who says of Jacobs: "having a minority consciousness, he could site himself nowhere....except in his speech and written language". The editors believe that readers, whether or not they already know the published work of the poet, will find many additional treasures in the unpublished work. Arthur Jacobs awaited redemption in his very own Vilna, "a bit east of the Gorbals,/ In around the heart".

And I hear most the miraculous, broken poems
That were made in the enclosures of insanity
Whose authors heard the chanting of the Inquisition
And smelt the smoke of the crematoria
And knew there was no escape, yet wrote
To show how life is at the verges of humanity.
Their great sound grew, and in that company
I walked past the pond and down the hill,
Aware that nothing was ended. With this Spring
They rose to a passionate renewal,
And I must serve their freedoms with my own.

The book is a discovery. In a time of hurriedly manufactured poetry, that of A C Jacobs stands out as the genuine article...His concerns, and his art in voicing them, reach across a historical awareness as deep as it is detached, a wit and a compassion as necessary as they are enlightened, and a depth of feeling as religious as it is unen-closed by dogma, Jewish or otherwise. Such a phenomenon is rare; he might be described as a poet's poet. At its best, his work possesses that purity of diction, emotion and precision, which leaves behind it the sensation of something said unsaid before, which could not be said in any other way.

Fewer than a hundred of his poems and translations had been published in book form in his lifetime, but dozens of unpublished poems were found among his papers. As a result a collected edition was published in 1996 which places him among the major English poets of the second half of the century. Charles Hobday

Review in Modern Poetry in Translation No 21, 2003

The translations, as English poems, struck me at the time as utterly convincing, lucid, precise, though the subject matter was sometimes quite oblique, mysterious even....Robert Friend wrote: '...It is hard to believe that his translations of David Vogel are translations... He has made Vogel's tone, the delicate nuances, his very own.' It seems to me that the boundary between Jacob's own poems and his translations is indeed quite indeterminate. Perhaps the same could be said of other poet-translators of this calibre, insofar as a poet will translate, if at all, those poets with whom some empathy is felt or whose work in some way complements - one might almost say completes - their own work. Daniel Weissbort