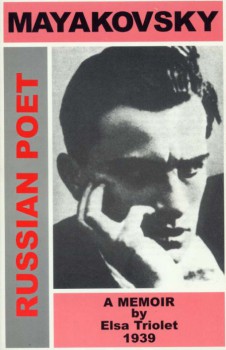 This life of the futurist of the Revolution by his lover, the novelist Elsa Triolet, was first published in French in 1945 as Maïakovski, poète russe. The memoir was written in 1939, nine years after the poet’s suicide at the age of 36, and later destroyed by the Gestapo. Mayakovsky was Triolet’s first love, before he met her sister Lili Brik, with whom he lived from 1915 until his death. The book contains extracts of Mayakovsky’s work – some which has never before appeared in English – in new translations by Susan de Muth.

This memoir is vividly written, biased, partial, incomplete. self-serving — and all the better for all of these things. Hearing Eye deserve our gratitude for making available this first English translation.

There's a frantic brilliance about this memoir that makes it difficult to put down. In fact, at times, Elsa Triolet's memoir seems more like a breathless telephone conversation with her mother than an acclaimed book written by a member of the French literary establishment.