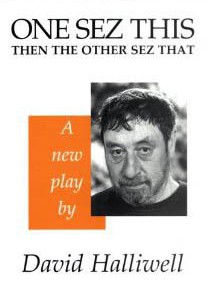 One Sez This Then The Other Sez That

Excerpts from work in progress.

"David Halliwell was a dramatist and director destined to be remembered for his first and most successful play, Little Malcolm and His Struggle against the Eunuchs. But, although he never repeated this initial triumph, he was a highly influential figure in the burgeoning fringe movement of the late 1960s. He pioneered the idea of lunchtime theatre and multi-viewpoint drama and left his mark on several close collaborators, including Mike Leigh." Michael Billington, the Guardian.