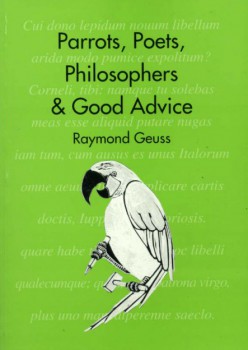 Raymond Geuss, Professor of philosophy at Cambridge University and author of the seminal The Idea of a Critical Theory and Morality, Culture & History is also a poet. Here, he has gathered together a series of instructional poems on how to live based on the works of Plato, Catullus, Juvenal, Martial, Euripides, Sappho and Aeschylus, whose works appear in the original Latin and Greek alongside Geuss's contemporary equivalents.
Topics include eating, drinking, work, indigency, old age, looks, cleanliness, sex, death, and the posthumous evaluation of human achievement.

Clearly a formidable linguist, Geuss is also a published poet. The story of how this happened is curious. "After my father died - this is going to sound terrible - I had these auditory hallucinations of hearing his voice, with its Midwesthillbilly accent that stood out like a sore thumb on the East Coast," he says.
Although a steelworker with little literary culture, the ghostly Geuss senior was reciting Latin poetry his son had studied at school. This led the latter to "look back at all the Greek and Latin literature that I'd read and begin doing some translations and then my own things".
When asked about the themes of his poetry, Geuss paints a fairly bleak picture. "It was mainly dealing with loss, deprivation, disappointed expectation - my youth was almost entirely devoted to disappointed expectation. I never believed that anything promised was going to happen.
"My parents were very poor and my mother was constantly trying to calm us down by saying things such as 'Things will be better tomorrow, we'll have dinner tomorrow, we'll have a sandwich tomorrow', but tomorrow never came. And it never comes. I don't feel that way so much now, but if you grow up with it, it never really leaves you."
Though he makes it sound very gloomy, Geuss' collection of "didactic poems", Parrots, Poets, Philosophers & Good Advice (1999), is full of wit, alcohol and bawdy high spirits. Even when tackling a melancholy topic such as the passing of time, it is in terms of the transformation of "young stud" into "aged codger (with flaccid todger)".
See full article at http://www.timeshighereducation.co.uk/403456.article

It is not every day that one is asked to review a book by the author of a seminal work (The Idea of a Critical Theory), nor is it every day that one is asked to review a series of didactic poems. G, philosophy lecturer and poet, has attempted to produce 'contemporary equivalents' of the likes of Plato, Euripides, Lucretius and Sappho (although he probably wisely restricts his poems to the short variety).
The original texts are helpfully placed alongside to allow comparison with G's own 'instructional poems', a genre he considers to be ready for revival, having 'fallen into desuetude during the past 200 years'. For G sees himself continuing a long tradition, regarding the Classical works as antecedents, and he deals with many of the themes familiar from the genre, 'wine, hot baths, sex', personal hygiene and appearance, 'an aged codger with flaccid todger', eating, drinking, and so on.
Some very familiar names are among those antecedents, Catullus, Martial, Juvenal, with some interesting versions of very familiar verses. However, since he is using a wide range of sources as his starting points, G is able to write on almost any topic, from an interesting series on Ariadne to poems such as 'Clytemnestra on Agamemnon' (working from Aeschylus) or 'Achilles to Patroclus'. At the same time, that very range makes this collection more difficult for classicists who have yet to read the likes of Damocharis, Leonidas of Tarentum and Tymnes, not to mention various graffiti fromPompeiiand a number of epitaphs. That is not to say that this collection could not stand on its own, but almost all of the poems either are, or could be, set in the classical world, and it is certainly possible to gain a deeper appreciation of the modern version with a good understanding of the original. (Even the Greek and Latin originals only get one so far!)
Quite how all these verses can be considered 'instructional' is hard to say, but G deserves credit for attempting to follow in some very famous footsteps and for producing a most interesting, wide-ranging collection, including a number of neat versions of both the rude and the melancholy. Fans of didactic excepted, it is probably better suited to someone reading for pleasure than instruction, being often more epigrammatic than didactic, with the more philosophical poems, perhaps unsuprisingly, where he seems to be at his best.