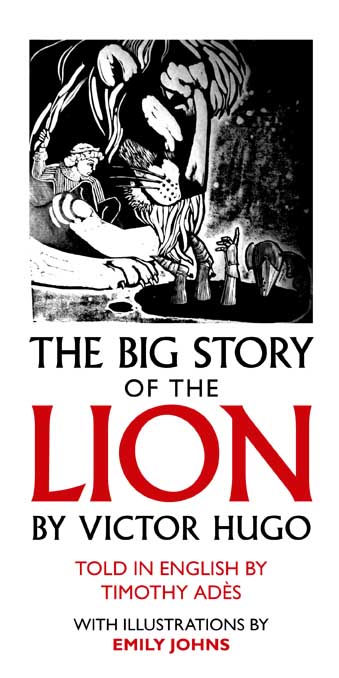 The Big Story of the Lion

Victor Hugo’s wonderful long poem The Big Story of the Lion was written for his grandchildren. It has been newly translated by Timothy Adès and illustrated with lino cuts by Emily Johns. This is a thick card concertina book.

extract from ‘The Big Story of the Lion’ i The Paladin A lion had clamped its jaws around a child, And carried it, unharmed, into the wild Forest, where streams and birds’-nests are at home. He’d seized it as one plucks a summer bloom, Not really knowing why, nor even torn The skin, through tender-heartedness or scorn; Contempt, or loving-kindness, or defiance. They’re serious beasts, and generous, are lions. The little prince was in a wretched plight: Raw meat and grass his diet, weak with fright, He cowered in the cave, half-perishing. He was the offspring of the local king: The boy was ten years old, with sweet bright eyes. The king had just the one child otherwise, A little baby girl of two; and since He was quite old, his thoughts were with the prince, The monster’s prey. The country-folk were awed: A lion more fearsome than their own liege lord! A hero wandered in. They told the brave Man what was up; he headed for the cave.