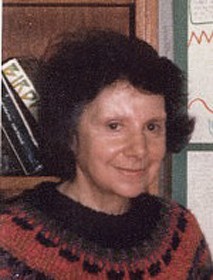 Beata Duncan studied at Birkbeck and University Colleges, London and lived in North London. She taught English Literature and Creative Writing to students from nine to ninety and worked in publishing and as a researcher.

Her poems have been widely published in anthologies, newspapers and magazines, including The Observer, Spectator and London Magazine, and have been broadcast on BBC Radio 3 and 4, including Poetry Please. She was twice a prize winner in the National Poetry Competition and gave regularly readings in London and across the UK. Several of her poems were set to music by the composer Richard Arnell.

Her pamphlet collection, Apple Harvest, was published by Hearing Eye in 2000.

Obituary in the Guardian

"Razor-sharp irony and a taste for the surreal are counter-balanced by a tender moral sense in the poems of Beata Duncan. Her voice, which bears traces of the best and worst of life's experiences, lends her work an authority we can trust. I have watched with interest as the stylish modern fables slowly accumulated over the years; the resulting book has been well worth waiting for."

"These are seemingly simple, often ironic, poems that exhibit an unadorned presentation of life and its experiences. They keep their emotion in check, demanding that the reader bring their own emotional energy to the poem. This is what all good poetry should do...The poem Presents is a good example of her style. The exchange of presents between friends is described — spinach for fresh mackerel. We know that these gifts have value in the giving by the way they are described... However, both gifts are allowed to waste, though not in any deliberate way, and the underlying sense of guilt comes through nicely... There is no comment made about the relationship between the man and the woman in the poem. Yet we are brought into the settled and accepted state of their friendship by the way the story is told. Each word, each piece of information in these highly crafted poems is chosen and presented in a manner designed to solicit the desired emotional response in the reader...If you want some superb examples of 'show don't tell' poems, look no further."