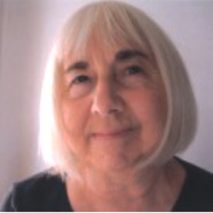 Ever since Ivor Cutler bought her a guitar when she was a teenager, Hylda has been singing and performing – around the coffee bars of 50’s Soho, with the City Ramblers Skiffle Group in Soho’s Skiffle Cellar, on TV and radio and even in Moscow and solo round the folk clubs and as resident ‘Elizabethan minstrel’ in the Elizabethan Rooms, Kensington.

She has also taught English as a Foreign Language in London and Spain, taught table tennis to London kids, founded and lived in a community on the South Yorkshire Moors, received a BA and an Msc in Russian studies from Hull University and the LSE, published three novels and two poetry collections.

Nowadays she gigs with the City Ramblers Revival, reads and sings her own material at poetry events and elsewhere and hosts a monthly poetry event, Fourth Friday.

She has 2 daughters, 4 grandchildren and 1 great-grandson.

She lives in South East London

She was educated at AS Neill’s truly ‘free’ school, Summmerhill.

She is the love child of itinerant, communist, market traders