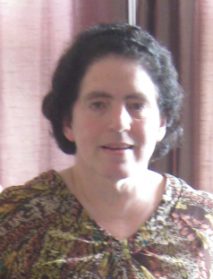 Now working as a freelance writer and copy editor, Jennifer Johnson was born in the Sudan and spent part of her childhood in Ghana. Later she worked as a VSO agriculturalist in Zambia. She returned to university to study BA English and MA Medieval Studies at Royal Holloway, University of London.

She has had poems in magazines such as Acumen, Envoi, Stand, Poetry Salzburg Review, The Rialto, The Interpreter’s House, South, The SHOp, Equinox, Orbis, Brittle Star, Other Poetry and others. She has also had a pamphlet published (Footprints on Africa and Beyond, Hearing Eye, 2006) and has won first prize (Harrow) in the Faber and Ottakar competition and the KQBX most original prize.

She has also had work placed in the Poetry on the Lake, the Scottish National Poetry Competitions and the Plough competition. A poem of hers was included in the Love and Loss anthology and other poems have been included in other anthologies.