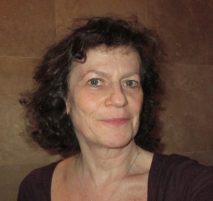 Jude Rosen is an urban researcher/explorer, translator, poet. Her pamphlet A Small Gateway was published by Hearing Eye (2007). Excerpts of her long sequence of poems 'Reclamations: walks, voices and narratives from the Olympic zone and marshlands of the Lower Lea Valley', were published in The Art of Dissent: Adventures in London's Olympic State, eds. Hilary Powell and Isaac Merrero-Guillemón (Marshgate Press, 2012). 'Reclamations' has been longlisted for the LiveCanon First Collection prize and will be published in its entirety by Thamesis, in 2016.