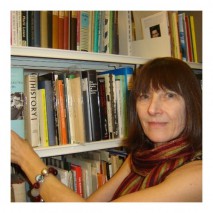 Lucy Hamilton was born in Sheringham, Norfolk. She was joint recipient of the Poetry School Award 2006/7. Her poems and translations have appeared in many journals including Modern Poetry in Translation, The Rialto, Shearsman and Poetry Wales and in anthologies I am twenty people! (Enitharmon, 2007) and This Line is not for Turning: An Anthology of Contemporary British Prose Poetry (Cinnamon, 2011). Ten poems from her pamphlet Sonnets for my Mother (Hearing Eye, 2009) have been translated into Arabic. In December 2010 Lucy became the first woman and first non-Muslim European in the world to appear, by live satellite recording, reading her poems at the Havana Café, Mecca. Last year she co-judged the inaugural Cambridge University Benjamin Zephaniah Poetry Competition. Lucy co-edits Long Poem Magazine. Her collection of prose poems Stalker is published by Shearsman Books (2012).