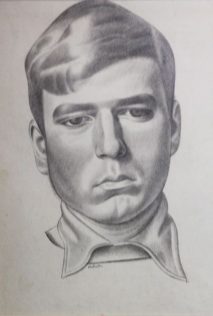 John Roberts, only child of the painter William Roberts and Sarah Kramer was born in 1919. He took a good honours degree in Physics at University College London, but wartime work in radar bored him and he joined the Merchant Navy. Invalided out, he decided to change tack and become a poet and guitarist; for many years he attended the classes of Emilio Pujol, as recorded in his entertaining book Guitar Travels, and he also gave occasional recitals. As a guitarist he also played in the coffee bars of Soho in the '50s and '60s, as a poet he published his work privately. Unfashionably, he chose to write in rhyming verse, the quatrain a favourite form. his parents, seeing that he was unlikely to earn much of a living, gave him the top two floors of their house on the Regents's Canal as a base.